Kizomba. What is it, and why are more people talking about it?  The word itself seems to stir up a whole range of reactions from those who have never danced it.  Some of my favorites are:

“Yeah, I think I’ve seen it and it reminds me of high school dancing. Not much to it.”

“Oh, I can’t do THAT, being glued to a partner that way?”

“It looks so simple.”

I laugh, not just at the reactions, but at how I can relate to them because, before I started learning kizomba myself, I’m sure some of those thoughts ran through my head as well.  But it didn’t take long for me to realize that there is so much more to the dance than what it appears to be from the outside.   In fact, all of those perceptions above disintegrate when the magic of the true kizomba takes a hold of you.

The small, subtle movements, as well as the close connection, require a control and sensitivity, as well as a trust and surrender that are not as easily attained as one might think.  And as far as the “newness” of the dance, tell that to the kizombeiros and kizombeiras, as they are properly referred to, who have grown up with the dance in their families for years!   What makes it ‘new’ to us is our lack of familiarity with the dance in this part of the world.   But to the dancers in areas of Angola, West Africa, where the dance originated, as well in Portugal, where kizomba later spread, kizomba has a history. It is not just this dance that we have come to have a fascination for most recently.  It goes back much further with roots from dances that a lot of us here have never even heard of.

That must have been why it didn’t sit right with me one day when I heard an organizer of a dance studio refer to kizomba as simply ‘African tango’.   A couple had walked into the studio inquiring as to what was going on that night.  And after seeing a sign for a kizomba social, they asked, “What is kizomba?”  Of course, I understood that the organizer was trying to give the couple something that they were more familiar with to relate to, in order to picture this ‘mystery’ dance in their mind.  And having danced some tango myself, I could see some of the tango nuances that were often used by kizombeiros in the dance.  But I also knew kizomba was not tango and that not all kizomba dances had tango elements in them.

I definitely did not have all the answers. In fact, I had very few.  But knowing how kizomba had affected me very deeply in such a short period of time, I felt like it deserved to be recognized for what it truly is.

Kizomba made me feel so alive, in a way that was different to anything else I had experienced before.  So I knew it had to have a life blood of its own, an identity, a history, and an essence that was individual.   I was touched that kizomba had invited me in, embraced me, welcomed me with open arms and heart, without even having known me.  And so, I felt I owed it to kizomba, to get to know it, not for what it might resemble, or what people might guess it to be. But for what it really is.  I wanted to learn its story, and help share it, because with every dance, I could hear it whispering that it had a story worth telling. And the whispering just seemed to get louder the further I was drawn in.

But in order to tell the story accurately, I needed to find someone who had years of experience in it, someone who had a deep understanding of kizomba and who knew it well. And sure enough, not long after I made this decision, I was given the opportunity to go to Seattle to meet such a person- Mr. Eddy Vents.  Not only did I come out of Eddy’s class with an even greater excitement for kizomba music and movements, but I learned so much about the origins of the dance and what makes kizomba unique and so addictive. 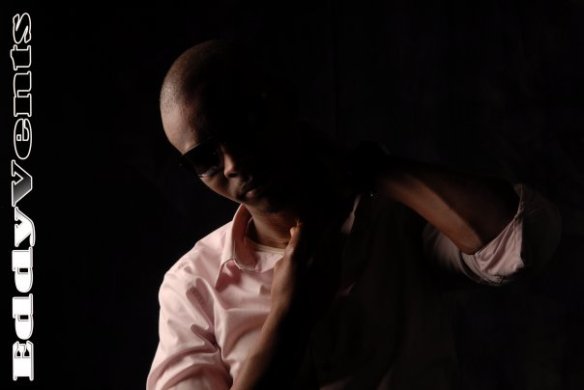 Tasleem: How long have you been dancing kizomba?

Eddy Vents: Well, some say before I could walk (laughs), but I have been dancing it or have had exposure to it, since I was very young.  And I have devoted over fifteen years of my life to studying it more intensely- its music and history and movements.  And so I’ve been dancing it for about 27 years now.

Where is the dance originally from?

Kizomba is originally from Angola, West Africa.  But it’s also from the five ex- Portuguese colonies.  One of them is Guinea Bissau, which is where I’m from.  And I grew up in Portugal.  Kizomba is from a combination of zouk and other African rhythms.  I love zouk because I grew up learning to dance kizomba to zouk.  Kizomba, the step, has existed for a long time. Kizomba, the music, is something new.  It’s been around from the late 80’s.

Where do you live now?

I live in London now.  I moved to England a few years back. And I teach kizomba in England and have traveled to many different parts of the world to share my knowledge and passion of the dance with others.

Your dance group’s name is called Pitanga.  What does the name mean? 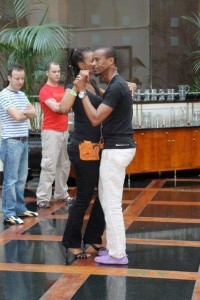 Pitanga is the name of a fruit.  I think it’s from Africa, but I don’t know from where exactly.

No, (shakes his head and makes a sour looking face). I don’t like it. (laughs).

You just liked the name (laughs)?

No, it describes a good mix of things.  Well, for one thing, the fruit is not sweet. It’s sour, like citrus, but not proper bitter or as strong as a lemon.  It’s a little bit sweeter than lemon.  And the reason for the name? Well, what we say is that pitanga, the fruit, is an aphrodisiac.  And we used to make jokes that kizomba can be an aphrodisiac as well for certain couples (laughs).

Plus the fruit is tropical and kizomba is tropical too, so that was where the idea for the name came from.

I’m glad you brought that up, about the joke, because the dance IS really close. And I find that, well, at least in the west, where we’re still learning it, sometimes, people from the outside, when they are watching it, they have an image of what it is but it’s…

Yes! I know some guys who think that they want to learn kizomba because they only see that you get to be really close to the girl and it seems so simple.  And then they try to dance it, and copy it, and they interpret it as just grinding or rubbing up against a girl, which is not what it is. And so it just ruins it.  I’m wondering if you see that misconception a lot, and how you, as a kizomba teacher, go about changing that.

We never can fight against that.  I mean, this thought about the dance is not just in Vancouver.  It’s everywhere, worldwide.  I mean, I even made the joke about it now with the Pitanga name.  But it’s not really how I feel about the dance.

It’s easy for people on the outside to think that kizomba has a lot of sexuality in it which can be true, in some ways.  But that’s not what the dance is about.

What people forget is that we grew up with the dance for many years.  So the sexuality aspect of it, if it was there, disappeared for us a long time ago. I mean, it’s not the purpose of the dance, or what it’s all about.  I posted a video on the internet of young kids -a girl and a boy- doing kizomba.  There was nothing sexual about it.  We do this dance for fun.  We don’t see it as sexual.

But that doesn’t mean that you can’t feel a connection or be attracted to someone when dancing with them.  Of course, you can actually end up having chemistry with someone you dance with.  But I don’t think that happens just in kizomba.  You can even be dancing House with someone, and you can feel that chemistry.  But I guess with kizomba, the two people are very close in the dance, so people look at it differently. 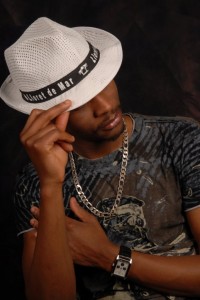 And about that closeness, you had said in the workshops that in kizomba, it’s about two people looking …

Yes (smiles). I just really liked the concept.  And the feeling is amazing.  Could you explain this a little further?

Okay, kizomba is all about connection.   And actually, the way you connect to your partner is the way you can create better control, in terms of the dance and the movement.  If you are less connected, you have less control.  And the way people connect and interact with each other always seems to come from the society they grew up in.

English people, for example, in general, say hello, like this (puts out his hand and goes to shake mine).

For them, it may seem polite, but what they don’t realize is that they have already created a barrier between you and them, with their hand, before they even know you.

Kizomba is about basically killing that barrier.  You and your partner are close, and you cannot have that block between you.  But it’s common to see those same English people dancing with their bodies far from each other, at first.

But with kizomba, you have to connect more, and without realizing it, you end up breaking that barrier.

You’re still going to find that people will say that it looks like two people rubbing against each other.  But, only after a while, when you start to get more into kizomba, will you start to take out that sexual connection to it.  You will become more relaxed, and without realizing it, your body will start to connect even more, in a deeper way.  And it’s actually when you connect in this way, that you can ENJOY the dance more.

Because my perspective is that kizomba has a lot of energy around it. LOTS. We’re talking about two bodies connecting, and then that being connected with the music.  And there’s a lot of energy that gets created between two people.  If you relax, and just allow the music to lift you, it’s amazing and addictive.  After a while, people don’t realize it, but they just want more and more.

It’s literally because of this energy that is always going on that you end up feeling that way.

The more comfortable you are with kizomba, the more you enjoy it because you don’t realise it but your body goes closer and closer and closer to your partner, and that is when you start to look and feel as if you are moving as one.

5 thoughts on “Kizom-what?- An interview with Eddy Vents- Part 1”