“Marc was the assistant choreographer of “Jesus Christ Super Star”….  He loves dance.  Not only are his choreographies and his vision incredible, but he’s also a beautiful person.  He fought cancer last year and [I believe] he was able to do it because he loves life.  That kind of drive… absolutely inspires me.” – Mary Antonini 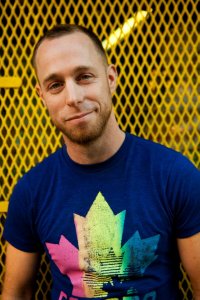 This was the first introduction I had to the performer and choreographer Marc Kimelman.  We hadn’t met in person, but I found it hard NOT to want to get a hold of him after hearing about his talent and accomplishments as an artist, as well as his courage, passion and strength for living. The more I read up on Marc and learned about him, the more curious and excited I was to hear details about his story, from the artist himself.  I really appreciated the way Marc responded with such openness, trust and enthusiasm when asked if he would have time to share his thoughts.  But what stood out to me the most was that Marc was absolutely correct in describing himself as being ‘as real as possible’, because that’s what I felt throughout the entire interview- that on the other end of that skype call was a genuine, positive spirit, an individual who shares his experiences with a creativity and depth that is truly inspiring.

Besides your obvious talent as a performer and choreographer, I think it’s really inspiring for other young guys to see a guy like you dancing from a very young age.  Was it ever an issue for you growing up that you were a boy and liked to dance?

You know, it probably was an issue in terms of maybe people treated me differently, but I really didn’t have any time to think about that because it wasn’t really a choice.  It was just ‘I’m going to dance’, and that’s kind of just the way it’s going to be (laughs).  I put on shows for my family ever since I was four or five years old.  And my dad actually put me into dance because he knew someone at a studio.  I tried it and fell in love with it.  It definitely got a bit more trying once I got to junior high.  But once people actually SAW what I did, people’s views changed.  And it became ‘cooler’ (laughs) to dance.

Do you feel that the stigma around boys dancing still exists?

Yes, I think that there still exists a negative stigma towards boys dancing.  But there is something about the way the world has changed with the recent popularity of So You Think You Can Dance, and lots of dance-based movies, and shows like All the Right Moves.  I think these really open people’s minds towards males dancing and they also prove that it can be a masculine thing as well.   Besides, people who have the passion for dance, or anything else, shouldn’t let anything stop them from getting to class.  I’m really happy to have started at a young age.  And it’s exciting to see how strong and confident the up- and- coming male dancers are.

I think dancing is an amazing art and talent on its own, but I think that choreography also takes a whole other mindset.  Are there places you go to, or people or experiences that you look to. for new ideas?

Well, I look to a few different places.  Physically, I still love taking class.  And I think that’s really important for me because it forces me to move in different ways.  When I was sick, I couldn’t dance at all, for at least five months.  So I took up Tai Chi because that was something that I could do.  It was really low impact, it had me moving, and it became quite meditative for me, and I still do it a couple of times a week, just on my own.  And so just seeking out new disciplines, new classes, and new teachers keeps the ideas fresh.  And there’s usually something in there that inspires an idea or a thought, or just a different way of moving that I wouldn’t have thought of if I had just been by myself working in a studio.

In terms of creating full pieces, I usually start and end with the text.  I’ll look at lyrics for whatever song I’m choreographing.  That’s always something that really brings it home for me.  And I will write out a piece word for word about what I want it to say.  That way, if I ever get lost, or experience a kind of ‘choreographer’s block’, I’ll always go back to the text and remind myself what it is that I’m truly trying to say