In a previous article, I described the impact salsa dancing has had on my health. Since then, I have been touched by the number of people who opened up to me about their own stories around dancing.
In particular, Peter Ferreira’s account of how he became a tango dancer is proof of the truly transformative power of dance. 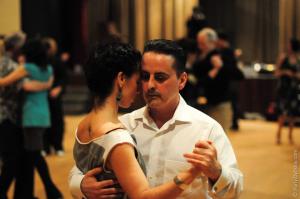 Peter, formerly in the contracting business, worked independently for five years. His friends described him as focused, perseverant, vivacious and amusing. He worked hard and was goal oriented, and from the sounds of it, Peter didn’t let anything get in the way of his goals.

But in January of 2002, Peter was involved in a serious car accident that changed his plans and his life. Approaching Nordel Hill, in Vancouver, he was hit by an oncoming driver. Although Peter was in his own lane, going in the opposite direction, the driver heading towards him lost control of his car, and crossed the center line. Peter attempted to dodge the car but couldn’t. Witnesses say that the car that collided with the driver’s side of Peter’s van was travelling at the speed of about one hundred kilometers per hour.

Fortunately, Peter survived, but the impact of the crash left him with a body that needed much repair. Two of the major bones in his leg were shattered – his femur and tibia. Rods were placed along the length of these bones, along with anchoring screws, to help the bones redevelop. Though the hardware was implanted to aid Peter in his recovery, the screws were too long for the bones, and this caused him extreme discomfort and pain. Yet he had to endure having the equipment in his body for three years.

There were also many other repercussions Peter had to face because of the accident. One of the most severe was damage to his left frontal lobe. The result was a blood clot in his brain. This had a huge effect on his memory. “I went to bed on a Saturday and the next thing I knew, I woke up on a Wednesday in the hospital,” he explained. Peter couldn’t remember any details of the accident. In fact, there is a six month period of his life, around the time of the crash, of which he has no recollection.

Peter’s loss of memory did not just revolve around moments in time. He also struggled to retain information that had been built up over years of experience. He lost most of his contracting skills and was struggling to remember how to use the tools with which he had been familiar for over twenty years.

Peter underwent rehabilitation treatment for two years. He worked with physical therapists and was put through a series of cognitive tests. After some time, he tried working out – using weights and a treadmill- and also tried swimming to strengthen himself. But he was not seeing the results that he desired. He had trouble focusing, and the activities suggested to him were very solitary.

Understandably, Peter experienced much frustration and anger. The accident had a considerable impact on his daily routines. He was having trouble sleeping, he was in pain, and he didn’t know if he could ever return to his previous job.

Yet, despite all the setbacks, Peter still managed to retain his determination and perseverance.

“Resilience is a good word for Peter,” said Geraldine Goyer, “He had it

when I first met him, and he still has it now.”

Two years after the accident, at a friend’s birthday party, Peter met Geraldine. She was a dancer and had been performing and teaching tango for over twenty years. Geraldine was moved by the story of Peter’s accident and encouraged him to try tango. She gave him her card, and Peter called her two weeks later.

Though Peter had not had any previous dance training, his attitude, teamed with Geraldine’s patience and teaching expertise, allowed Peter to excel quickly. Geraldine also knew something that Peter was yet to discover – that dancing had the power to heal, “I could tell he really needed the lessons, and there was no way I was going to let him walk out the door without seeing where the dancing went, and what it could do for him,” said Geraldine.

Through dance, Peter began working on his balance, coordination and muscle strengthening. The movements involved were very different to any of the other forms of exercise he had tried. Dancing, furthermore, wasn’t just physically rewarding for Peter. Tango also served as a great mental workout as it kept Peter concentrative and alert. Also, the repetition of steps and movements helped to redevelop his memory, “Things were so up in the air with Peter…But dancing got him to focus and have direction.” explained Geraldine.

With tango, Peter was also given the opportunity to make deeper 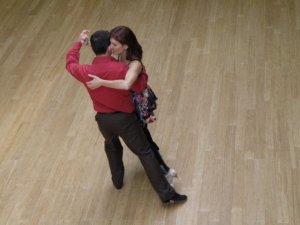 connections with his surroundings. His constant connection to the dance floor gave Peter a grounding and centeredness that he needed. He was learning to respond todifferent dance partners, and the space in which he was moving. This allowed him to explore the space within himself, gaining more insight into who he was and what he really wanted. As Geraldine so poignantly put it, “I think that to Peter, tango means connecting to a part of himself that he wasn’t really in touch with before.”

This, in turn, led Peter to interact on a deeper level with others. Before the accident, most of his time was concentrated on himself and his job. But the accident helped Peter find something he was passionate about. This passion for dance helped him open up to others and welcome new relationships into his life.

Because of tango, Peter became stronger in body, but also in mind and spirit. Dancing brought him a new kind of happiness that was liberating, “To me, tango represents freedom of movement, thought, and success,” shared Peter, “It’s not about winning over someone. It’s a team sport where everyone wins.” 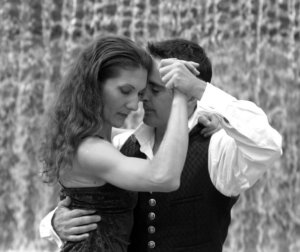 Not only did Peter enjoy the dancing, but he was also very good at it, “He had a natural affinity for it,” explained Randy, a close friend of Peter’s. In fact, after a couple of months, Peter was helping Geraldine demonstrate in her classes. And within six months, he did his first performance with Geraldine.

Since then, Peter.and Geraldine have been teaching and performing at various venues. They even opened up a dance studio in Burnaby called Dance Addicts where they have been teaching tango for a few years now. Moreover, not only has Peter been featured in other articles which also discussed health and dance, but individuals who have had to face experiences similar to Peter’s have come to him for advice as he serves as a great source of inspiration to them.

Observing Peter teach, it is hard to believe that he wasn’t dancing tango earlier on. He moves with such fluency and allows the music to take him over. Peter is so carefree, constantly making jokes and entertaining the class with his sense of humour and sarcasm. Yet, the seriousness of how he got to where he is today still lies within him. And this gives more meaning to Peter’s lessons, “Dancing is such a healing activity, at so many levels,” said Geraldine, “and Peter brings that into his teaching often. We both do.” 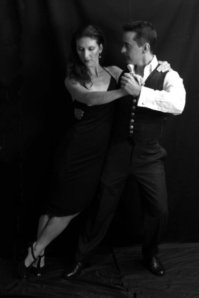 At first, it seemed that the accident prevented Peter from focusing and from achieving what he wanted. But over time, he realized that he was given a chance to refocus his life, and to have new dreams revealed to him. “Some people think of an accident as an interruption or a major setback,” said Randy, “Others think it’s a sign from God to show you another path,” Looking back, Peter is now so grateful for the new path that was revealed to him – one paved by the healing power of dance, “I went through hell. The accident was hell,” admitted Peter, “but it was also the best thing that ever happened to me. I wouldn’t have started dancing if it wasn’t for that crash. Geraldine and Tango saved my life.”

4 thoughts on “The Healing Touch of Tango”